The Philosophy of Hapkido 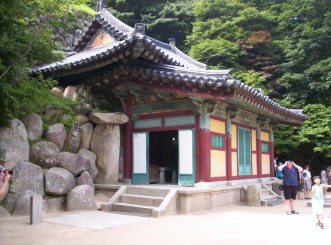 The techniques of Hapkido are based on three principles:-

There are several ways to describe what each of these principles means.  Here we shall attempt a brief explanation by describing Hapkido's response to an attacker's punch directly to the face.

Theory of You (Water)

When deflecting the attacker's punch, we are like water which has been penetrated by a stone; no sooner has the stone divided the water than it flows together again to surround and envelop the stone. Similarly, the Hapkido student will "go with the flow" in the execution of his techniques.

Instead of meeting an attacker's punch with a direct block, in other words meeting force with force, we would utilize the circular principle and deflect it and re-direct the force of the punch.  The circle is always present in Hapkido techniques; it may be a large circle which is performed when executing a throwing technique or a small circle such as that used in a wrist lock.

Even though the force of the punch is directed straight at us, we do not oppose that force but instead go with it.  In this way we harmonize with the force and become one with it.

The art of Hapkido therefore combines smooth flowing, evasive movements coupled with sudden hard strikes, which place great emphasis on "snap power".  Hapkido probably has the widest range of kicking techniques of any martial art.  There is a comprehensive range of escape techniques, which employ the use of pressure point attacks, joint locks and throws.  Add to this the use of traditional Korean weapons and you will see that Hapkido covers a wide spectrum of self defence.  Although this may seem daunting to the beginning student, it is also one of the attractions of the art, giving rise to an immense sense of achievement and in the end, self respect, as one-by-one the techniques are mastered.

As a system of self defence, Hapkido can truly be described as a complete Korean martial art.