The WEAPONS of HAPKIDO 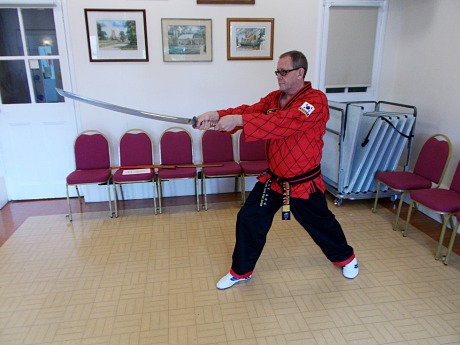 The study of Hapkido involves much more than empty-hand or bare-foot self defence.  Throughout history, weapons have played an important part in the martial arts of all nations.

Here we look at the traditional korean weapons skills which are practised in Hapkido Moo Hak Kwan.

Evidence of Korea's first metal swords were found in scripts from the Paekche Kingdom (A.D. 200).  Unlike the swords from China and Japan, which were made to a set size and pattern, Korean swords were custom made for the owner of the weapon.  These were made to fit the strength and body characteristics of the swordsman.  Lengths ranged from short knife-like weapons to longer blades.  These could be double or single edged.

Unlike its Japanese counterpart, the Korean sword is wielded both single and two-handed.  The sword is known as Gum in Korean and utilizes both linear and circular movements.

The style of sword most popularly used in Moo Hak Kwan is pictured here.  While to the untrained eye it may look like a Japanese sword it has a slightly wider and straighter blade with more channels. The staff is one of man's earliest weapons and every nation has a history of fighting with the staff.

The Staff in ancient Korea was made from a special wood known as Pak Dahl which was found only in the Kyung Bok Province.  The staff was treated with an oil to strengthen and preserve it and was then steamed to allow the oil to penetrate it.  This process made the staff so strong that it was claimed that even a sharp sword could not cut it.

The techniques of the Long and Middle staff contain both circular and linear movements used for blocking, striking and poking.  The Dan Bong or short stick techniques differ from other staff techniques because the short length makes the targets the body's sensitive pressure points. 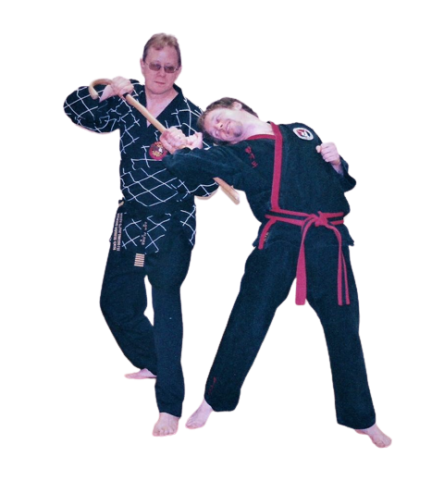 Ji Pang E Sul or Cane Techniques were first  popularized in martial arts by  Buddhist Monks during the Silla kingdom of Ancient Korea.  The cane became so popular as a weapon that all sorts of customised versions appeared including hollow canes which contained a sharp sword or knife.  The techniques of the cane can vary according to the shape of the stick.  The hooked-end cane and umbrellas are useful for striking, joint locking, pressure point strikes, trapping with the hooked end and poking with the tip.  The cane is a very practical self defence tool because it is legal to carry and no one suspects that the cane can be turned into a deadly weapon. 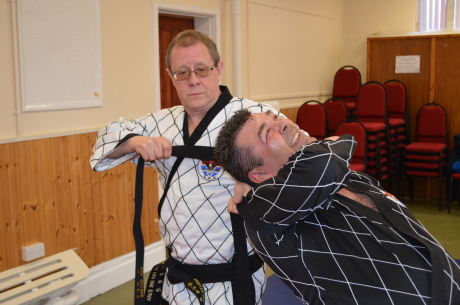 In Ancient times the palace guards of the Korean Royal Court employed rope techniques to subdue and control any trespassers.  It was forbidden to carry any bladed weapons within the Royal Court so the guards adapted a harmless looking length of rope into a weapon.

Rope techniques are rapid, circular wrapping techniquesdesigned to effectively wrap any part of the attacker's body.  The rope is also used to block kicks and punches just before wrapping and trapping the opponent's limbs. 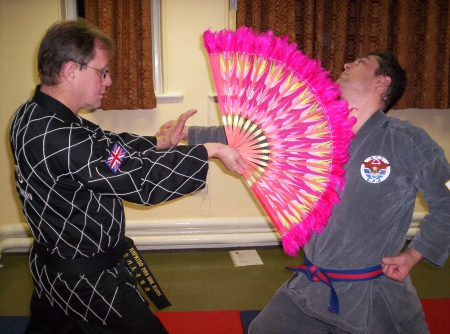 The Fan was also a favoured weapon in the Korean Royal Court where bladed weapons were banned.  The fan was small and lightweight and could easily be concealed in loose garments.

As a self defence weapon the fan is used either open or closed with the butt, sides and tips used as striking surfaces.

In ancient times, sometimes small blades were hidden in the folds of the fan so when the fan whipped open the blades would fly out towards the attacker.  Brightly coloured feathers were used to decorate the tips of the fan but these were also used to conceal blades. 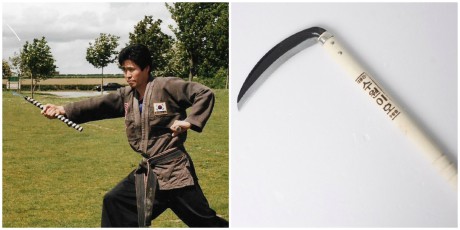 The Nat or Sickle

The Nat was a farming tool which was adapted as a weapon.  Farmers usually carried two sickles and when used as weapons one would be used to trap or deflect an attack while the other would strike the enemy.